Home / Our Blog / From Latasha / A Neighbourly Inspiration 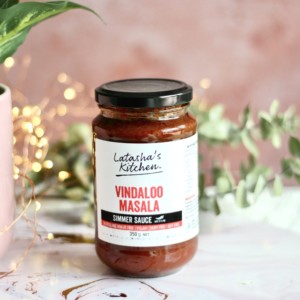 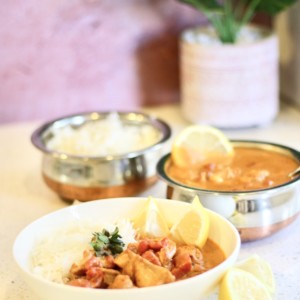 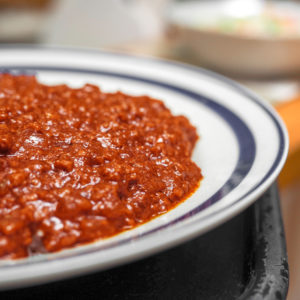 From as far back as my café days, my neighbour Phil who lived four houses down from me, has been addicted to my Vindaloo Masala. It was a signature dish from my Leederville eatery and today still brings back many treasured memories of both customers and staff, who loved it so much it became a regular order. I also have such fond memories of preparing this dish in my first year at the café with Sam. My very treasured first kitchen hand Sam, sadly passed away much too young in 2006. And I also loved having the adorable Debra now working and living in Brisbane; who had the most incredible palate, taste testing it for me in the early days. Some of my best memories from the café were of working with those two in the kitchen; while I honed my homestyle dishes for restaurant cooking.

Back then, the vindaloo paste I made was used to create two meat dishes. One a caramelised Red Pork Fry and the second a fiery Beef Brisket Vindaloo. I’d start by making a rich vindaloo base paste in which I’d then fry thinly sliced strips of pork belly until it caramelised in its own fat and juices. Diced beef brisket was also similarly prepared but in a much richer and hotter gravy base.

When I ran cooking classes, I taught my recipe to hundreds of people. Once I started the manufacturing side of my business, bottling this paste was inevitable. But never did I ever imagine turning my Vindaloo Masala Concentrate Paste into a simmer sauce. For this recent development I have to thank Phil for the inspiration!!

Phil, who after all these years still hasn’t conquered his addiction to the flavour of my Vindaloo. But while he loves the fiery flavour of a great Vindaloo, he’s had to get creative in the kitchen to turn his vindaloo obsession into meals that both his family and friends can enjoy as well.

Late last year, I was the recipient of a dish he made using a ⅓ jar of my Vindaloo Masala Concentrate Paste and my favourite tinned tomato brand ‘Mutti’. He was so impressed with his creative ingenuity and sought my opinion. As soon as I tasted the first mouthful my taste buds went into overdrive and I started obsessing its flavour profile. I knew I had to get everyone eating this delightful, delicious meal he had created. So I asked Phil if I could share his recipe. Generously, he said he simply followed my suggested recipe methods by adding onions, caramelising them first, then browning the minced meat and ooh la la adding 2 cans of tomatoes!!! His recipe is up on our website for you to enjoy – Mince Vindaloo Curry.

However, I found myself still fixated over the Sauce profile itself and felt some would miss out if I didn’t do something about it. So I decided to formulate a test batch of the recipe sans mince. Immediately I felt the recipe had merit as a stand-alone simmer sauce for a variety of other creations. From chilli con carne to coney island hot dogs, fried minced eggplant for vegetarians, meaty meatballs smothered in the sauce served over pasta, as a base for a cheesy cauliflower potato bake, a topping over jacket potatoes lashed with sour cream, as a delicious base for various slow cooker meals, a tagine dish incorporating fish, zucchini and chickpea, a stew incorporating plump juicy sausages and okra, or even richly encased as meat pie filling or a pizza sauce.

Honestly, it’s the easiest Simmer Sauce I’ve bottled to date as I’ve had little to do given the base Vindaloo Masala was already a winner! I just slowly caramelised onions, tomatoes and it’s turned out to be a BOMB! of a Simmer Sauce. Vindaloo Masala Simmer Sauce is a plant-based sauce, vegan, low in sodium, low in fat, gluten and wheat free, dairy and nut free.

How do you use it?

A quick and easy way would be to pan fry in some good oil; 1 kg tofu, paneer, chicken or any other veggies, sausages, koftas, meat, mince, pancetta or seafood proteins of your choice until golden. Pour over the Vindaloo Masala Simmer Sauce, rinse out the jar with ½ cup water and gently simmer until proteins are done and sauce is reduced and thick. Surprise yourself! So moreish and left overs are too good to believe!!