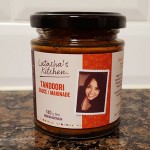 Location of Manufacture: Made in Australia 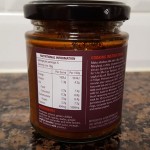 Review: In trying this marinade I have followed the cooking instructions listed on the jar barring one exception….I have not used ghee when cooking the chicken…only because I’m not a fan of ghee. Also with the yoghurt I found this marinade works well with a light Greek yoghurt. For the purpose of the review I have used chicken thighs and chicken tenderloins cooking them two ways. The thighs have gone in the oven (as recommended on the jar) and the tenderloins have been grilled on the barbecue (as a test case I barbecued them over charcoal).

This tandoori marinade has just the right balance of spice and is not too hot. I found barbecuing brought out more of the spice compared to oven roasting, however you can reduce the amount of yoghurt added if you wish to get more of a chilli kick. Based on the recommended cooking instructions on my personal heat scale it sits at 1 out of 5 (right where you want a tandoori sauce to be).

Verdict: Latasha’s Kitchen Tandoori Sauce/Marinade is a very well made marinade that has a good balance of spices and nice level of heat. It can be used to oven roast as well as an alternative to your typical barbecue grill sauces. Works best with chicken thighs or drumsticks. A delicious marinade with a very traditional taste. Based on my opinion its probably the closest you will get to that tandoori flavoured chicken without the use of the tandoor to cook it. My final score is 4 out of 5.