We are Helen, Rob, Marcus (10) & Charlotte (9) … We all enjoy Asian food – particularly Indian, Thai & Malaysian. Rob likes his food to be spicy, authentic & well flavoured, Charlotte & Helen a little a less spicy & Marcus likes everything to be mild.

Charlotte really enjoys being in the kitchen – prepping & cooking, Marcus is better at critiquing & eating! They’re both keen to do as much as possible themselves.

So we chose Butter Chicken as our 1st recipe to make from the Latasha’s Kitchen range – easy to make, not too spicy but still full of flavour.

1st job – marinate the chicken. We used breast meat rather than thigh as we prefer the flavour. We let the chicken marinate for about 4 hours… don’t usually do this but it made the chicken very tender & would definitely do again.

Then while the chicken was baking Charlotte prepped the veggies – onion, capsicum & mushrooms…not part of the recipe but we eat lots of veggies & thought we’d just add them to the butter chicken sauce …. more on this later!

1/2 jar paste plus tomatoes, paprika etc … it started to smell really good… at this point Marcus wanted to help too!

Rob chopped the chilli – we added a few to the sauce & extra for Rob to use as a garnish.

The chicken & all it’s juices went next … looking good.

Next onto the yoghurt sauce …. mm… no garam masala or fenugreek leaves. Raided the pantry & found fenugreek seeds – so we added a nice big teaspoon.

Latasha’s advice – don’t use seeds they’ll make the dish bitter – quick panic as Rob & Charlotte sieved them out of the sauce. Phew!

Rob had suggested we use a full jar of paste as we were using veggies – which would have given us a more intense flavour.

Another option Latasha suggested was roasting the veggies separately – with yoghurt & Latasha’s Kitchen Tikka Masala paste … that way we’d have the intense butter chicken flavour & still get our veggies.

We’ll definitely try that next time.

It was great to sit down as a family & eat a delicious Indian meal at home that everyone in the family had played a role in making…. & it was pretty easy! 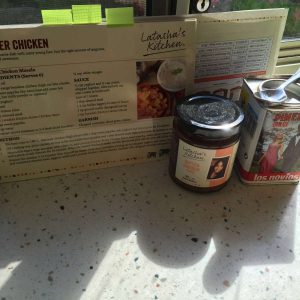 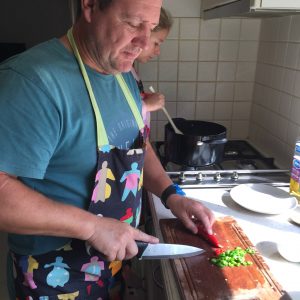 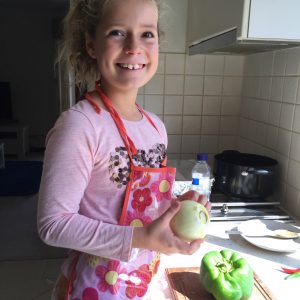 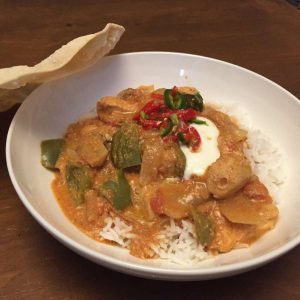 100 ways with chicken! There are so many great th