Home / Our Blog / From Latasha / For the Love of Moong Beans

For the Love of Moong Beans 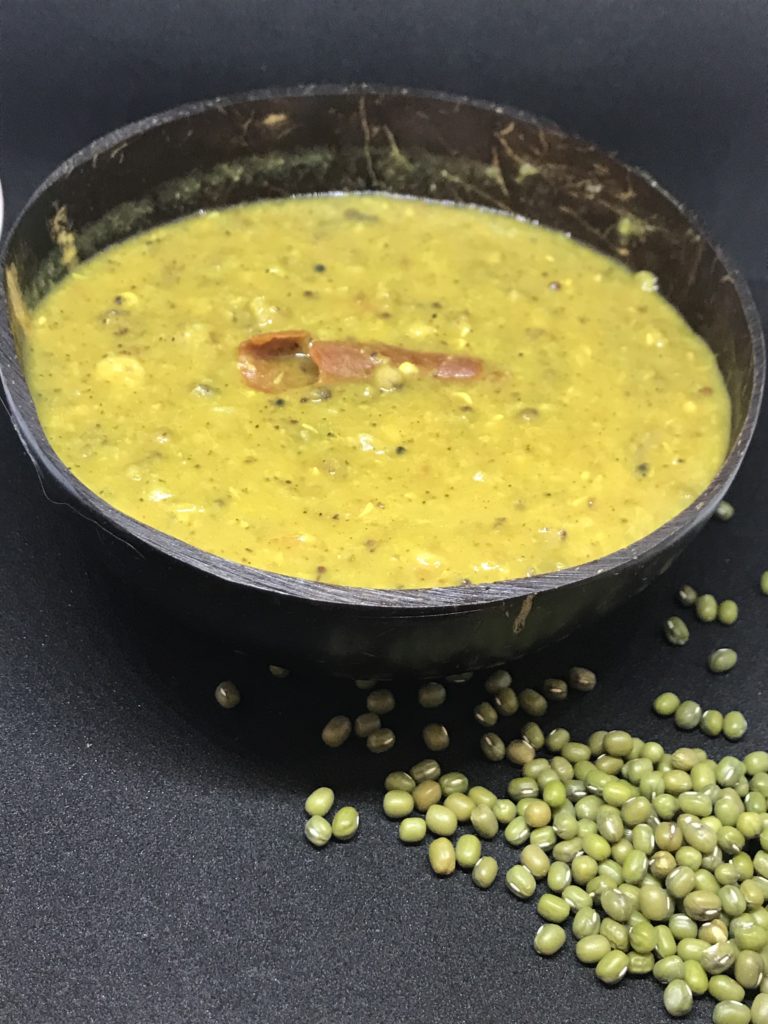 One of my favourite pulses is whole moong beans. I love the simplicity of cooking and eating this very nourishing bean. I prepare it very simply as a dhal curry then enjoy it in a multitude of ways through the week, with rice, chapati or paratha. The first day I usually have it very simply with chapatis or rotis. The next day I may fry an egg or masala omelette to accompany it in my rice meal. Third day with fried masala fish and a zesty cucumber raita on the side does the trick.

If I have any leftovers on the fourth day then I’ll make some extra side vegetable dishes to accompany it such as stir-fried turmeric radish, or a potato masala. I may occasionally also make some chilli chicken fry or black pepper lamb chops as all these side dishes simply enhance the flavour of this healthy nutritious curry,

When you serve this dhal you can fry some extra brown onions and garlic in ghee until they’re crispy and add over the dhal. Or you can simply chargrill marinated tandoori or turmeric cauliflower and add over the top. I hope you’re inspired by my palette and a little background that follows below on this lovely bean. 🤗

The moong bean variously known as green gram or mung bean is part of the legume family. Cultivated mainly in East Asia, Southeast Asia and the Indian subcontinent it is used as an ingredient in both savoury and sweet dishes in these regions.

Bean sprouts, commonly available everywhere are actually sprouted mung beans and easy to grow at home. Mung beans are light yellow in colour when their skins are removed.

Moong bean plant grows all over India as a rain-fed crop. The beans grow inside pods and are threshed out after the pods are dried – either on the plant itself or in the sun. Whole mung beans are small, oval and olive green in colour. Moong beans are either left whole in their skin or split with the skin on. Whole moong beans have a stronger flavour than the split ones and are rather chewy and musky.

There is also a variety sold which is split and skinned. When split, they are small, flattish and yellow. Yellow, split and skinned mung bean is extremely easy to cook, needs no soaking and is very easy to digest. Boiled and mashed split mung beans, are recommended as an easily digested protein for babies. And they are also useful in geriatric and convalescent diets.

The whole beans and split ones are quite different and are seldom interchangeable in recipes.

Mung bean paste is made by dehulling, cooking and pulverizing the beans to a dry paste then used in fritters and pancakes.

In South India, especially Andhra Pradesh, batter made from ground whole moong beans (including skin) is used to make a variety of flat crispy pancakes called pesarattu or pesara dosa.

While in Chinese cuisine, whole mung beans are used to make a tángshuǐ, or dessert, which is served either warm or chilled.

In Hong Kong, dehulled mung beans and mung bean paste are made into ice cream or frozen ice pops. Mung bean paste is used to fill Chinese mooncakes in East China and Taiwan. Boiled and shelled beans are used as filling in glutinous rice dumplings; or the beans may also be cooked until soft, blended into a liquid, sweetened, and served as a beverage.

In Korea, skinned mung beans are soaked and ground with water to make a thick batter. This is used as a basis for Korean pancakes. In Japan various sweets fillings are made using mung bean paste; which is then stuffed in mochi (pounded sticky rice flour) and moon cakes. These are aesthetically pleasing treats popular as gifts and enjoyed during tea time with friends.