They say, “everything old is new again” and that’s certainly true of some old-fashioned fruits and veggies I remember from my childhood. Moringa, green banana and jackfruit are enjoying renewed popularity, and for good reason. But one in particular makes me wince to think about it!

Moringa is a tree that unwittingly brings back memories of childhood pain. We refer to this tree’s vegetable as ‘Muringakaya’ or ‘Drumstick’. Although many parts of this humble yet miracle tree are edible, we generally consume the leaves and fruit pods found in the long drumsticks.

Unfortunately, I can’t confess to having fond recollections of this tree. Kitchen duties especially as due punishment for being naughty, included stripping the tiny leaves from the tree’s branches. Dad would cut a humongous pile and Mum made us pluck off every tiny leaf. This took hours and I grew to dislike the smell, taste and the very sight of them. Any naughty mischief on our part, meant we also received a couple of strokes in quick succession on our legs, with the very thin branches. I remember hopping from one leg to the other, trying to evade the strokes while venting much anger at said veggie. The older we got; the thicker the branches became!! But age … oh, what it does to one.

Strangely, I find myself adoring the unusual taste this veg brings to dishes and feeling nostalgic. As an adult, I greatly appreciate the fact that it is considered a super food and is cultivated for its medicinal value. Health stores sell the leaf in powder form and tablets. I love using the pods in South Indian stir-fries like Poriyal and Thoran as well as a vegetable, in various curries.

Whenever I find moringa at Asian grocers, I always snap it up. The tree grows really well in Perth and many Asian and African families have one growing in their backyard. I recall planting one in our first home in North Perth 25 years ago, only to find our gorgeous dogs joyfully digging and chewing their way through the plant the next day!

Several years ago, my brother bought a cutting from the internet and the tree provides an abundant harvest, both in leaves and drumsticks from his tiny Perth backyard. You can use the leaves in place of spinach and or scrape the pods from the drumsticks using a melon scoop, then use them in South Indian veg stir-fries like Thoran or Poriyal. The entire drumstick can be lightly scraped on the outside with a serrated knife, cut into 5 cm sections and used in lentil stews, Burmese and Thai soups, fish and goat curries. When the drumsticks are cleaned and cut this way, they also freeze well for later use.

When I was running my cafe, a lovely Burmese lady used to provide me with an abundant supply in return for some of my curries as payment.

Here are some pictures of the tree, along with some of the dishes made. Dried moringa leaf is sold in some Indian grocers like Prime Products in Osborne Park, Perth while the frozen drumsticks can be found in the freezer section in some stores. Honestly, there’s nothing like using fresh ones though, if you can find them.

More information on this tree can be found on the internet under ‘Moringa Oleifera’. If you give this veg a try, do let me know what you think.

I’d also like to talk about green bananas and jackfruit. Both these trees were grown in our backyard when I was growing up. Little did I know how topical they would become five decades later. I have to smile when I realise they are now recognised as some kind of new ‘wonder food’. 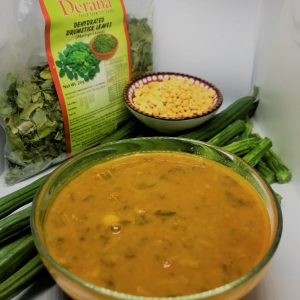 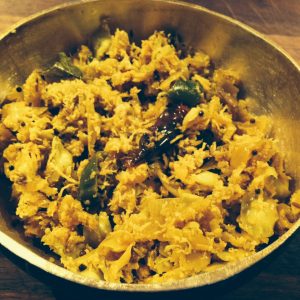 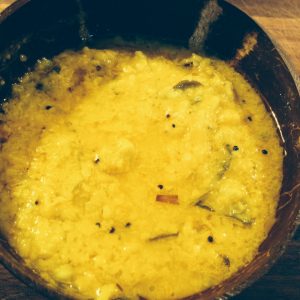 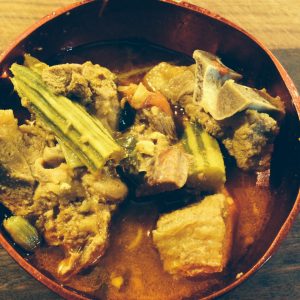 There is a company in Queensland – Natural Evolution – that has become the world’s first and only certified producer of green banana resistant starch and green banana flour.

What began as a problem has turned into a successful business. Did you know that over 100,000 tonnes of Queensland bananas – sheer mountains of them – are dumped every year because they don’t meet cosmetic retail standards? This is a tragedy! Happily, FNQ banana farmers, the Watkins family discovered a way to turn green bananas into a nutrient-rich powerhouse of goodness and they have since won an innovation award. Their Green Banana Resistant Starch is gluten free, obviously vegan, high in prebiotic fibre, Serotonin and inulin. The powder is added to smoothies, baking recipes, cereal, soups or simply consumed in juice or water as a health supplement. Natural Evolution also make Green Banana Baking Flour, gluten free and high in fibre and nutrition. It’s a fabulous natural binding ingredient, much loved by bakers who use it in muffins, banana bread and lots of other recipes.

When I was growing up, green bananas were one of our staples. Mum would peel, chop and soak the fruit in salted water and turmeric before cooking it in stir-fries and curries. While Dad would make banana crisps. He would cut unripened green bananas finely using a mandolin, mix them in turmeric and fry in coconut oil. 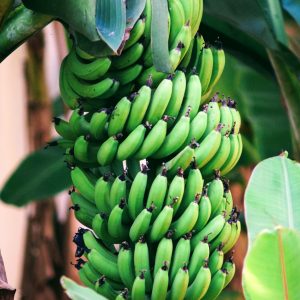 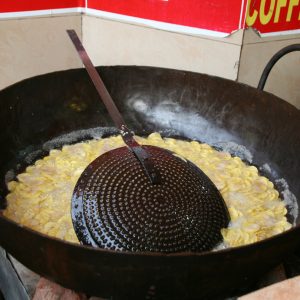 Another tree we had in our backyard was the jackfruit tree. When ripe, it is eaten as a fruit; while my Dad would make a delicious jam Chakka Varatti, which everybody loved. The tender, young, green jackfruit can be plucked early; and Mum would make Southeast Asian-style coconut vegetable curries with lemongrass, or South Indian-style stir-fries.

The jackfruit seeds cooked in salted, boiling water are eaten as a snack; or used in veggie stir-fries and curries.

You have to hand it to vegans for their constant quest to find new ways of using fruits and vegetables. Particularly those that fell out of favour a long time ago. What used to be commonplace lapsed into obscurity, but now these ingredients are used in myriad ways. Jackfruit is used as ‘pulled meat’ in vegan burgers and can be bought tinned in brine.

A growing number of local Asian grocers are capitalising on the renewed interest in this produce. They are selling moringa, green bananas and jackfruit freshly diced or cut into quarters, ready for customers to experiment with.

I wonder what the next discovery will be! Why not have a go at using these fruits in your cooking. I would love to hear what you do with them.

Jackfruit growing on the tree 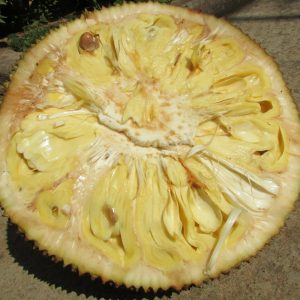 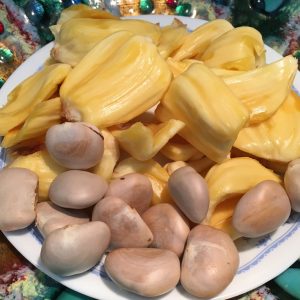