TV Chefs Are Making Us Hungry (And Getting Us Cooking)

Who’s your favourite celebrity chef? And do you base your devotion on the cuisine, the star power, the skills level or how good looking they are?

These days, celebrity chefs wield an awful lot of power. They are the new rock stars and probably even have their own gastronomic groupies! The fandom is immense, the merchandise is abundant and TV cooking shows just keep on giving. First run or re-run, there’s always something new to discover among the plethora of hints and tips these audience-seducing kitchen superheroes continue to spout. And the more we watch them cook, the more we want to get our aprons on too!

Here are my favourites:

Oh, I so love Jamie Oliver for his heartfelt passion and good intentions to change the way we shop, cook and eat. He doesn’t sugar-coat things – except maybe a batch of exquisite beer and cardamom apple fritters – but tells it how it is. Battery hens, chicken nuggets made from reclaimed meat and soaring type 2 diabetes rates have all been exposed on his programs. But his efforts to show us how to get a full meal on the table in fifteen or thirty minutes have inspired countless home cooks to back away from the food delivery apps and pick up a pan.

The self-titled ‘Crazy Bull’ has energy to burn and a personality that spills out all over the place. The Spanish accent adds to his infinite charm and the boyish twinkle in his eye spells Mischief with a capital M. He reckons kids are the toughest food critics in the world but says his greatest role is not as a chef, but as a Dad to the two children he raises with wife Sascha.

I used to live in Hobart so watching Ben Milbourne whipping up sumptuous dishes using proud Tassie ingredients makes my mouth water! A former school teacher, Ben appeared on MasterChef Australia in 2014 and never went back to school. To date, he’s chalked up a number of TV programs including Food Lab and Ben’s Menu.

I don’t know what it is about Rick Stein but I find his voice as calming as a glassy ocean. A seafood aficionado, you’ll find him flitting off to far-flung fishing villages all over the world. He (literally) throws himself in to whatever is happening, including night netting for squid on a full moon with Langkawi fishermen, and munching on fish eyeballs from a curry in Penang. He confesses a deep penchant for jellied eels and is famous for saying: “People should eat less, moan less and value food more”.

I seem to be a fan of male chefs mostly and could go on and on with Hugh Fearnley-Whittingstall, Paul Hollywood and Antonio Carluccio. One female chef I adore is Lidia Bastianich, the Italian-American force de la cuisine who can turn a humble plate of pasta into a culinary masterpiece.

Cooking shows play an increasing role in encouraging Australian home cooks to get busy in the kitchen. No matter how basic or how ‘MasterChef-y’ the recipe, there will always be a spark of inspiration to get mouths watering and tummies grumbling.

Be inspired, not overwhelmed!

I recently watched Nick Honeyman in The Best of New Zealand whip up a Thai Red Curry with mussels and clams and his recipe contained 19 ingredients! Now I don’t know about you but I don’t keep things like kaffir lime leaves and palm sugar on hand. That’s where Latasha’s Kitchen products come in very handy. She’s done all the hard work for you, combining the perfect quantities of the freshest ingredients to be authentic, delicious and easy to prepare. I also didn’t have clams or mussels on hand (and anyway, I would prefer fish and prawns) but I did have some beautiful, diced grass-fed beef. Considering I was hankering for those deep, rich Thai flavours, it didn’t really matter to me what protein I chose. The end result was a lovely Thai red beef curry, very satisfying indeed!

Variations: Use whatever vegetables you have on hand. I always keep peas in the freezer and usually have a potato or two floating around. You could toss in a handful of frozen mixed vegies or add some capsicum slices, baby corn or diced carrot. If you want to increase your greens, stir in a small pack of baby spinach leaves a minute or two before serving. 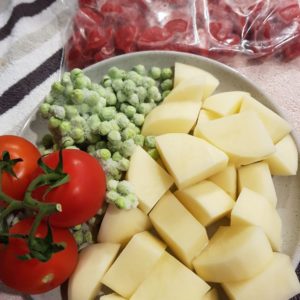 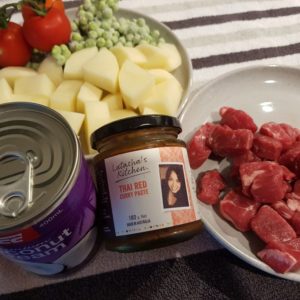 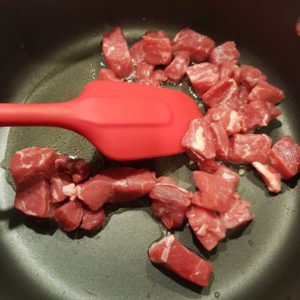 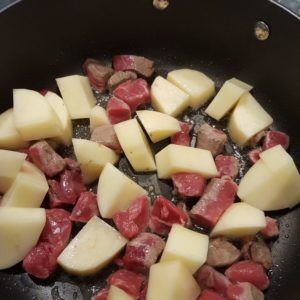 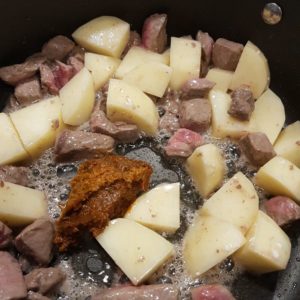 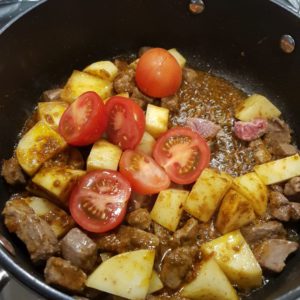 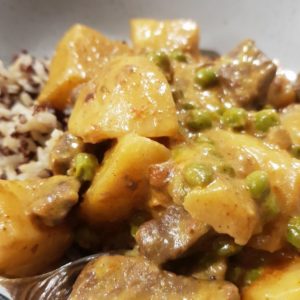